In the Update 1.195, weather was given a large overhaul. It is no longer a purely scripted event and can affect your survival game play now. This guide aims to discuss the best methods for staying safe and where you can find specific ones.

Each weather uses their own survival multiplier values, these values can change wind speed, temperature, oxygen level, and solar output. Since each weather has a light and heavy variant, I will be using this format:

Fog is a weather effect that spawns on Earthlike, Triton, Alien, and Titan. Fog is the most power-dangerous weather in the game due to the very low wind experienced inside of it. For areas with lots of fog, it is best to seek alternative power sources through solar panels, hydrogen engines, or reactors.

Earthlike
Fog can spawn in most locations on Earthlike excluding deserts, it is not a common weather type with rain or thunderstorms taking priority.

Triton
Fog only spawns on the ice plains of triton. It is the perfect zone to keep a pack of backup solar panels due to the lack of surface features.

Alien
Fog can spawn at ice lakes or grassy biomes. It is much more dangerous than normal fog due to the toxic air that comes with it, keep your helmet down unless you want to suffocate! It can be easily identified through the green hue.

Titan
Fog can spawn at the ice lakes of Titan, it behaves the same as Alien’s in that it is toxic. 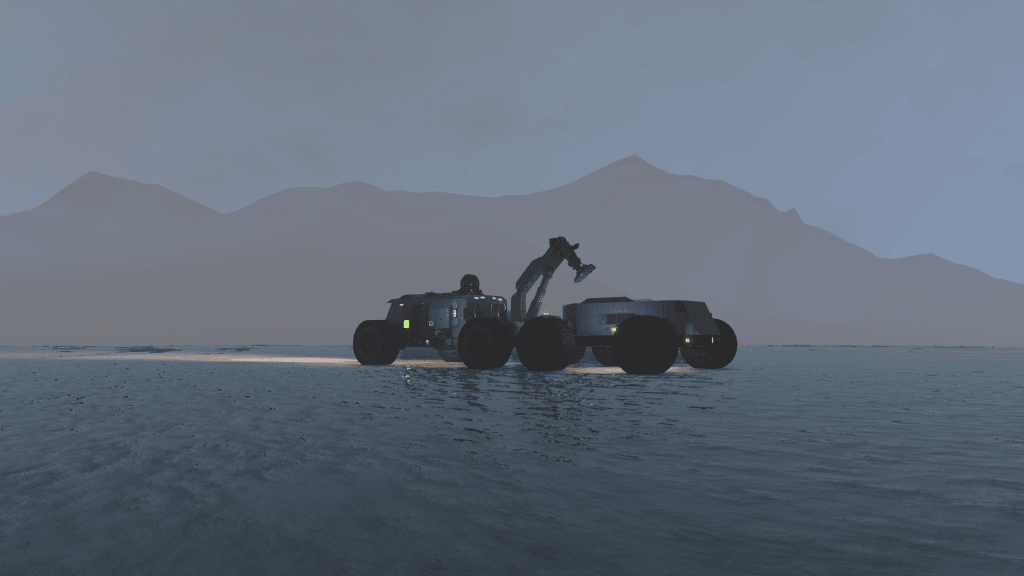 Sandstorms spawn on Earthlike, Alien, Mars, and Titan. They occlude vision drastically and almost completely block solar panels from collecting light. Wind turbines experience a large increase in power output due to the wind speed. Mars sandstorms are special, they have lightning, you might want to setup a decoy array!

Earthlike
Sandstorms spawn in the deserts of Earthlike

Alien
Sandstorms spawn in deserts and yellow grass areas of the Alien planet.

Mars
Almost all areas of Mars experiences sandstorms, the poles of the planet are safest.

Titan
All but the ice lakes of Titan experiences sandstorms. 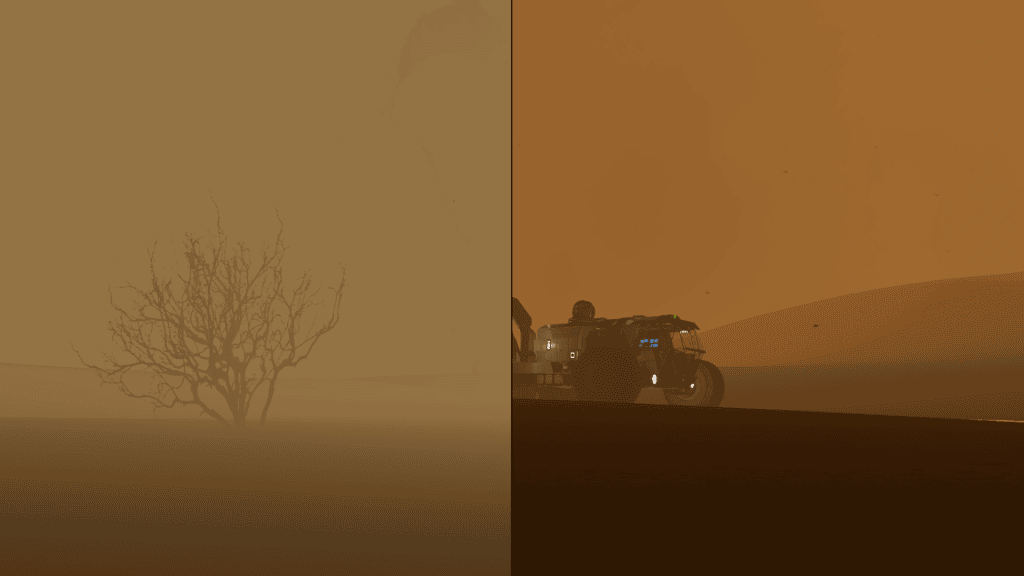 Snow spawns on Earthlike, Alien, Triton, Mars, and Europa. It has very low wind speed and temperature. It’s best to use solar panels in the light variant of this weather since not much sun is occluded

Earthlike
It will only snow where there is snow on Earthlike.

Alien
Like Earthlike, snow will only spawn where there is snow.

Mars
Very rarely, it may snow a short time at the poles of Mars. It actually does snow dry ice on Mars in real life.

Triton
Triton lies in almost constant light snow. There may only be a few minutes with clear skies. You may experience slight frostbite when visiting.

Europa
Like Triton, europa has very common weather, though it is much more intense. It’s the perfect hiding spot to keep your gear safe! 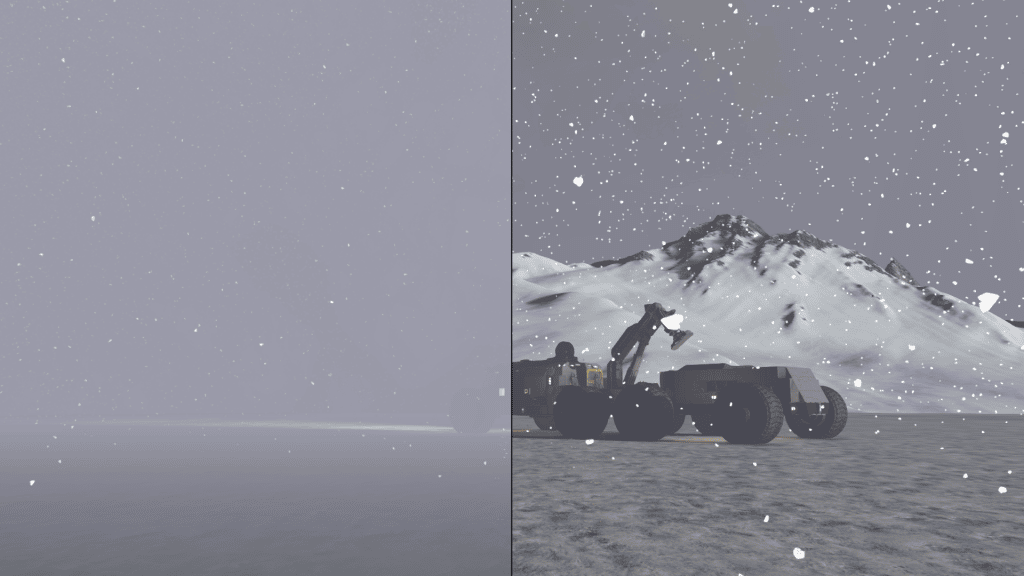 Thunderstorms can spawn on Earthlike and Alien. Thunderstorms are arguably the most dangerous weather for grids, though damage can be prevented if you know your stuff. Lightning in thunderstorms has a low chance of hitting your grid or player, if it hits your grid, you may want to have a decoy in place. Decoys are the lightning rod of SE, antennas will be struck if you do not have one. If you don’t have a decoy or antenna, a random functional block will be struck with lightning. You can also prevent any lightning from hitting your grid by moving underground. Decoys provide a safety radius of 50 meters. 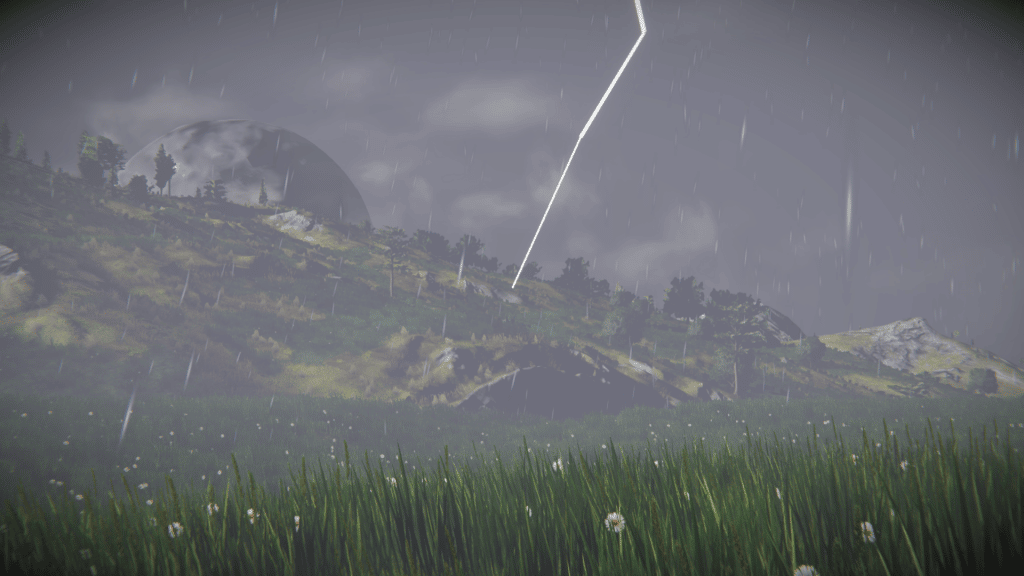 Rain can spawn on Earthlike and Alien. Rain is not a dangerous weather effect, it slightly affects wind and solar power, you should not need to worry at all about this weather, enjoy it!

Earthlike
Rain spawns in the same areas as thunderstorms

Alien
Rain spawns in the same areas as thunderstorms 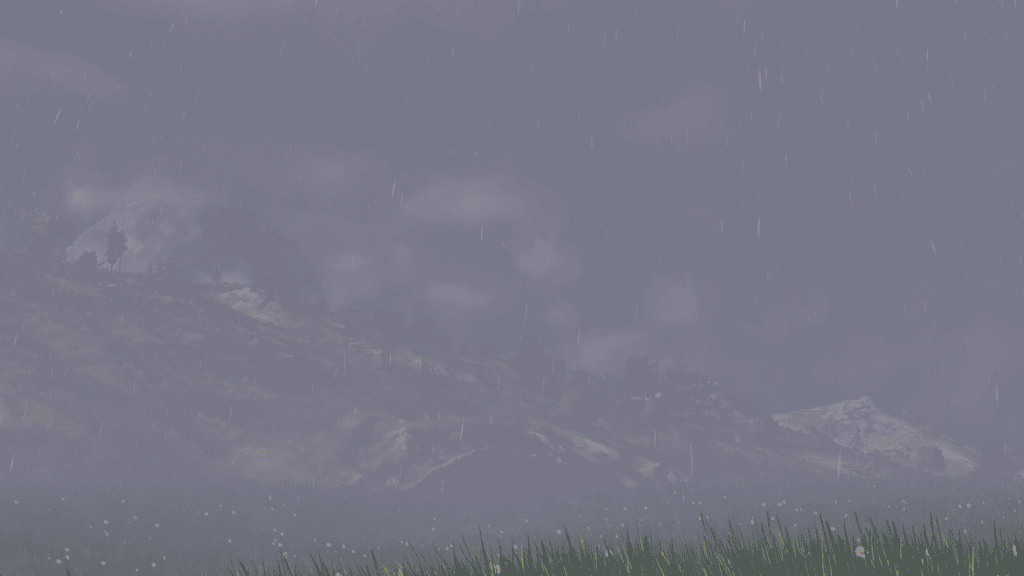 Electrical storms only spawn on Pertam, a new planet added in 1.197. Electrical storms are the most dangerous weather in the game because of the high rate of lightning strikes. The electrical storm is visually a sandstorm, with some minor adjustments. Lightning damage can be prevented through the use of decoys or antennas. Decoys provided a protection range of 50 meters. 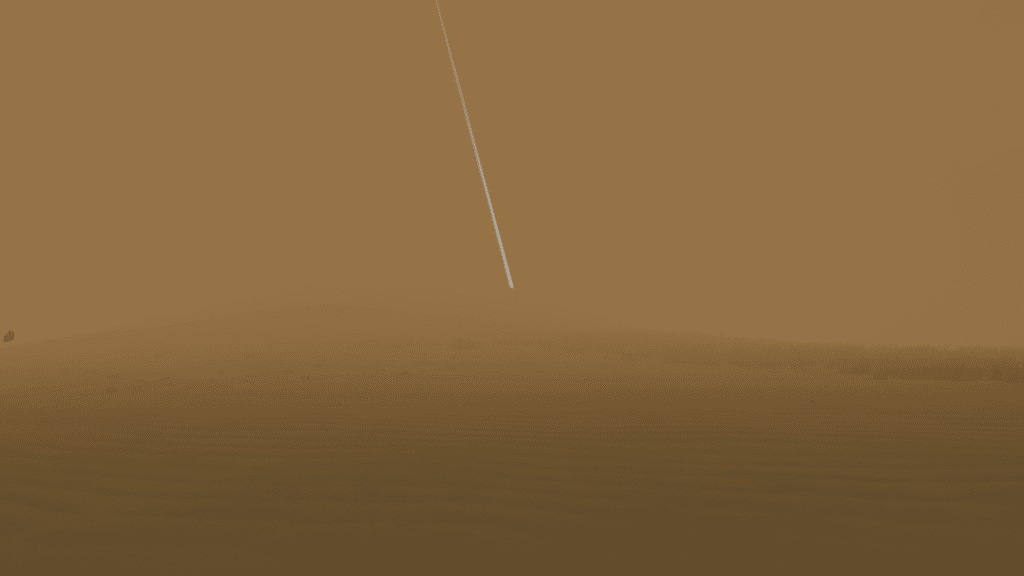 Controlling the weather can be done in two different ways, through the new Alt-F10 admin menu, or through the command system. I find it is easier to use the admin menu since you don’t have to remember the names of all weathers and it has controller support.

In 1.195, an admin screen for weather was added, it is much simpler than typing commands as you do not need to remember specific weather types or syntax. It is also better for XBOX players that may use it in the future.

By pressing Alt-F10, an admin menu will appear, select the dropdown that says Admin Tools and switch to Weather. 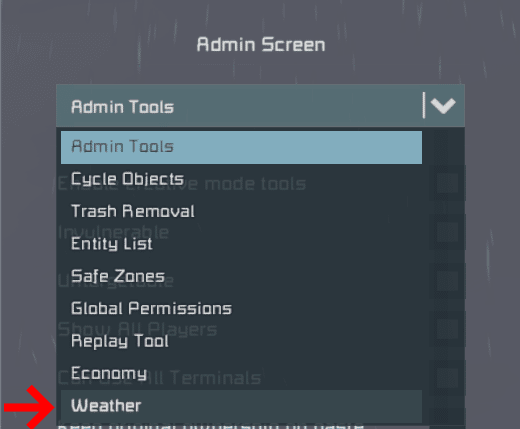 This is what the full admin menu looks like. I will explain each button below. 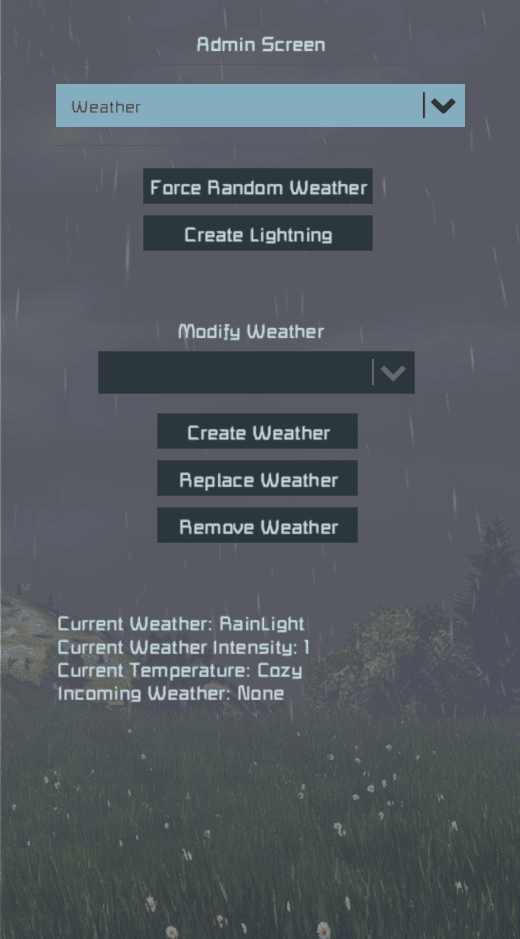 Force Random Weather
This button will create a random weather using the planet’s automatic weather system, it will select a random weather the same as it would automatically. This will remove/override any already existing weather at your position.

Create Lightning
This button will create lightning at the position you are looking at, ignoring any existing weather.

Create Weather
This button will create the weather selected in the above drop-down menu. It will remove/override any already existing weather at your position.

Replace Weather
This button will replace the current weather with the selected one in the drop-down menu, instead of removing/overriding the existing one, it will only replace what type of weather is running and continue to keep position/velocity/life.

Remove Weather
This button will remove any existing weather at your position.

Commands
These commands are the same as released in 1.194, they have been updated to use Keen’s internal command menu and show in /help now. To run any of these commands, the default key to open the chat-box is Enter

/smite
Running this command will create lightning wherever you are looking, it behaves the same as Create Lightning in the admin menu.

/rweather
Running this command will create a random weather using the planet’s automatic weather system. Same as the admin menu, it will override any existing weather.

/weatherlist
This command will list all available weather types, it is considered the alternative to using the drop-down menu as seen in the Admin Menu.

/weather [weather]
This command will create the weather in the first argument. It will replace any weather that exists currently, to remove a weather, run /weather clear.

If you’d like to learn how to create custom weather effects or systems, see the links below: