The time has come! The team has been working hard on this update and today, we delivered. New blocks, enhanced gameplay mechanics, and a reimagining of warfare in Space Engineers.

Warfare 2: Broadside expands and improves vehicle combat in Space Engineers. We are continually inspired by our incredible community and so we have created this vision of war based on community feedback. Your creations, machinations, mods, stories and visions of the world of Space Engineers helped guide our efforts and deliver one of our biggest updates ever!

The goal of Warfare 2: Broadside is to bring you more fun and engagement with Space Engineers, both on planets and in space. Defending against pirates, boarding a freighter, having a tank battle on a moon, or a breakneck dogfight through the canyons of Pertram, we believe this update will change the way you play.

While war is the theme, we mustn’t forget that this is Space Engineers, and thus “building and creativity” remains the center of the Space Engineers universe.

With this update, we are introducing a series of quality of life improvements as well as entirely new mechanics. 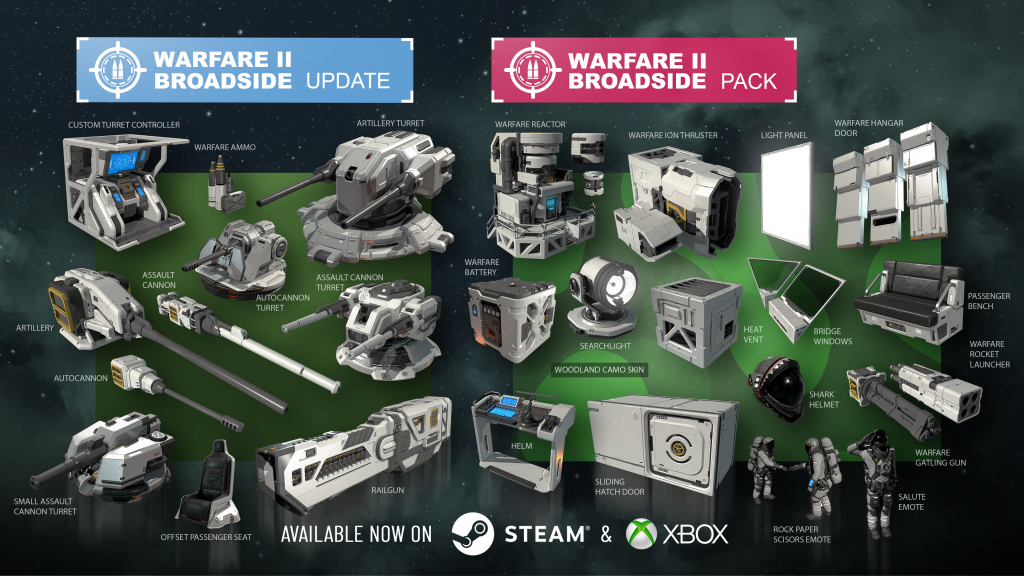 New Mechanics and QOL changes include:

There is so much to cover, let’s get started!

With this release, we are again expanding the number of blocks, introducing new gameplay features, and expanding your creative tools!

You can find a complete list of all free game content below. We are also offering you the opportunity to support the continued development of Space Engineers by buying the Warfare 2: Broadside DLC, which includes even more thematic additions to Space Engineers!

Warfare 2 Combat changes
Warfare 2: Broadside brings a staggering amount of change to combat in Space Engineers in the form of QOL changes, as well as entirely new mechanics and systems. The guide below covers those changes and provides an easy guide for future fighter pilots, battle-barge captains, and warship officers.

Custom Turret Controller (subgrid turrets)
Provides a simplified way to design and construct custom turrets and control them, including AI targeting. Designed for ease of use with a straightforward setup process.

Railgun
A large static railgun that fires projectiles at extremely high velocity and is able to penetrate many layers of armor. Has a very high power requirement and needs to recharge it’s capacitor similarly to jump drives, after being discharged.

Artillery Turret
Huge capital battleship turret. Designed for long range engagements, provides devastating firepower against even the most heavily armoured targets. Is not effective vs small and fast targets due to its slow tracking speed and overall limited mobility.

Artillery
Static variant of the titanic artillery cannon. Designed for long range engagements, provides devastating firepower against even the most heavily armoured targets. This weapon has substantial recoil when fired.

Assault Cannon Turret
A true multi-role weapon, designed with versatility in mind the Assault cannon is equally well suited to use in close quarters as well as at range. Delivering a powerful punch the Assault Cannon excels in its role as a primary weapon on smaller craft, and a secondary weapon on even the most titanic vessel.

Assault Cannon
The multi-role Assault cannon. Provided in a fixed mount format. Delivering a powerful punch the Assault Cannon excels in its role as a primary weapon on smaller craft, and a secondary weapon on even the most titanic vessel.

Autocannon Turret
The Autocannon turret is a significant improvement over the gatling turret in raw stopping power. Extremely effective against small grids such as fighters and rovers. The telltale sound of an Autocannon firing gives even the most staunch soldier a reason to pause.

Autocannon
A fixed mount Autocannon. Extremely effective against small grids such as fighters and rovers. The telltale sound of an autocannon firing gives even the most staunch soldier a reason to pause.

Artillery shell
Large calibre shells for use with the mighty Artillery turret or static Artillery cannon. Handle with care.

Railgun Sabot
Rail gun ammunition comes as a multipart sabot with as metal jacketed depleted uranium core. The outer “carrier” shell of the sabot is shed during flight, prior to the core striking its target.

New Scenario: Asteroid Armory custom start
It’s time for a new start in the “Asteroid Armory”. Play as the red or blue faction against friends in this prebuilt conflict zone. Go solo and engage in a bit of piracy! Join the Red faction, take command of Big Red, and hunt cargo ships! Use the Asteroid Armory as a weapons test platform, blasting everything in sight! This “showcase” provides a testbed for the new weapons as well as access to both of the Iconic red and blue ships!

We would like to thank you, our community, for your continued support, collaboration and inspiration. You feed our “Need to Create”.

A very special thank you to:

…and so many others that have, and continue to, inspire us with their creativity, ingenuity, and passion.

Recently, we had a chance to sit down with some of the talented members of our modding community and discussed a series of improvements to the modding API. Included in this update, these changes will have a big impact on the ease of mod development and modder freedom.

Close collaboration with our modding community ensures changes can be made that best reflect their needs. This open communication simplifies the process of improvement and ensures that the modding community has direct access to the development team.

“…adding an API to the air tightness system, which in turn allows me to actually calculate displacement for water realistically…” – Jakaria

For a detailed look at our most recent Mod API changes, please check out our changelog. (link)

“I and the rest of the WeaponCore team are really looking forward to this update. We are excited to see Space Engineers take the games “competitive elements” to the next level and see strong alignment with the WeaponCore framework. We are also very excited to leverage all of the new ModAPI features in the coming weeks and months.” – Darkstar

We are very proud of our ongoing community partnership and look forward to continued collaboration.

Similar to our previous major releases, we hope you will take this opportunity to support the continued development of Space Engineers. This DLC pack consists of cosmetic items that enrich your game visually. None of the features in this package provide any advantage to players who purchase this DLC.

Warfare Ion Thruster
A refreshing new version of the Ion Thruster. These new thrusters allow for more complex and imaginative arrangements. These thrusters are available for both small and large grid ships and come in a variety of designs.

Warfare Gatling Gun
A modernized gatling gun design. With extended barrels and a heavier feel. The spinning barrels of a gatling gun have never looked so good.

Searchlight
An articulated spotlight that behaves like a turret. Able to track targets at limited range. Comes fully equipped, with all the standard spotlight features, including custom colors, blink settings, intensity slider etc..

Passenger Bench
Troop carrier style passenger seat. Multiple seats can be arranged as a bench. Designed to seamlessly fit together and provide seating for multiple engineers.

Light Panel
An alternative to existing lighting solutions. Works well as ceiling decoration with passage blocks. Designed with a small profile for tight spaces. May also double as a disco dance floor!

Helm
A new take on the cockpit. A true command station. Give orders, or take them, in style. “Helm 108!”

Warfare Battery
Charge your railgun with this new, stylized battery. For all your power needs.

Sliding Hatch Door
A single large bulkhead door. This heavy duty, industrial style door has only a small porthole for viewing. Perfect for keeping the air in, or something out…

Shark Mouth Helmet skin
For the hunter, circling its prey.

“Rock Paper Scissors” emotes
A “pvp” emote for deciding who needs to go on the next mining run or take point in a firefight. Randomly selects and shows one of the rock, paper, or scissors animations. Can also show a specific animation with the /rock, /paper, /scissors chat command.

You can find the full changelog here.